“We believe analysis of exosome DNA taken from blood samples can help determine the presence of a cancerous tumor somewhere in the body, as well as identify mutations without the need for a tumor sample.” 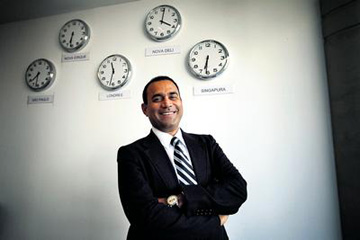 Dr. Raghu Kalluri was born in St. Louis, Missouri. After completing his B.S. in Chemistry and Genetics, Dr. Kalluri earned his Ph.D. in Biochemistry and Molecular Biology from the University of Kansas Medical Center and his M.D. degree from Brown University Medical School. Following his postdoctoral training and work as a research associate in kidney immunology and tissue injury/repair at the University of Pennsylvania Medical School, he moved to Harvard Medical School (HMS) in 1997 as an Assistant Professor of Medicine and as a faculty member based in the Department of Medicine at the Beth Israel Deaconess Medical Center. Dr. Kalluri was named Associate Professor and the Director of the Center for Matrix Biology in 2000. This program became the Division of Matrix Biology in 2006, when he was appointed the Chief of the Division and promoted to Professor of Medicine at Harvard Medical School. He also held faculty appointments in the Departments of Biological Chemistry and Molecular Pharmacology at HMS, Harvard MIT Division of Health Sciences and Technology, Harvard Stem Cell Institute, and was a research fellow of the HMS Peabody Society.

In 2012, Dr. Kalluri moved to The University of Texas MD Anderson Cancer Center as Chairman and Professor of the Department of Cancer Biology and the Director of the Metastasis Research Center. He currently holds the R.E. Bob Smith Distinguished Chair for Cancer Biology and previously held the Olla S. Stribling Distinguished Chair in Cancer Research and the Rebecca and Joseph Brown Endowed Chair at MD Anderson Cancer Center. Dr. Kalluri’s research laboratory is broadly focused in the study of cell/tissue microenvironment and its impact on cancer progression and metastasis, and tissue injury and repair/regeneration. His recent work on exosomes had led to new diagnostic and therapy approaches for pancreatic cancer. His collective research work has led to clinical trials and several patents. Intellectual property derived from his discovery research led to the formation biotech companies and licensing of his laboratory derived technology to several biopharmaceutical companies.

Dr. Kalluri has published over 280 manuscripts and has trained over 80 postdoctoral fellows, 13 graduate students, and 56 undergraduate students; 55 of his trainees hold academic positions around the world. Dr. Kalluri continues to teach first year core courses for graduate students and medical students. He serves on science and health advisory panels in the United States and European Union. He serves on the editorial boards of several academic journals representing biology and medicine.

For his scientific achievements, Dr. Kalluri has received many honors and awards, including the Jacob Henle Medal from the Georg-August University in Germany in 2015 in honor of his contributions to medical research. He also received several research excellence awards for his work on basement membranes and extracellular matrix as related to fibrosis and cancer progression including the 2016 Ruth Leff Siegel Award for Excellence in Pancreatic Cancer Research from the Columbia University Medical Center. He is the fellow of American Society of Clinical Investigation and the American Association for the Advancement of Science (AAAS) and also received several mentorship and teaching recognition awards from the Beth Israel Deaconess Medical Center and Harvard Medical School.